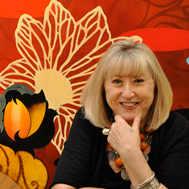 The gallery world is in a time of flux and many artists are looking for unique approaches to sharing their work with new audiences. Join professional Arizona artist Barbara Rogers for a discussion on becoming more empowered as a contemporary artist living in Arizona. Many tips for career success and avoiding pitfalls will be shared! The rapidly expanding opportunities for identifying appropriate venues for you to sell, market and exhibit your work will be discussed. No matter where you are in your art career or your desire to have an art career; please come to this meeting with all your questions for Barbara. If your question is not answered at the meeting; it will be personally answered later by Barbara.

Rogers has exhibited widely both nationally and internationally including one person exhibitions at major galleries and museums in San Francisco, Seattle, New York, Chicago, Pittsburgh, Scottsdale, Germany, South Korea and the United Arab Emirates. Her work is in major public and private collections including The San Francisco Museum of Modern Art, The Scottsdale Museum of Contemporary Art, The Oakland Museum of Art, and The San Jose Museum of Art.

She was born and grew up in a small town in Northern Ohio and graduated with a B.SC. degree in Art Education from Ohio State University. In California she studied painting at The San Francisco Art Institute with Richard Diebenkorn, Elmer Bischoff and Frank Lobdell. She studied life drawing with Nathan Oliviera at California College of Arts and Crafts. She received the Eisner Prize and her MA in Painting from the University of California at Berkeley. At UC Berkeley she studied with NY painters Michael Goldberg and Angelo Ippolito. Her major professor was the Chicago painter, Felix Ruvolo.